For the 2015 season, Isack dedicates himself exclusively to FFSA races in a new category: CADET (11-15 years old)

The new Colors of Isack 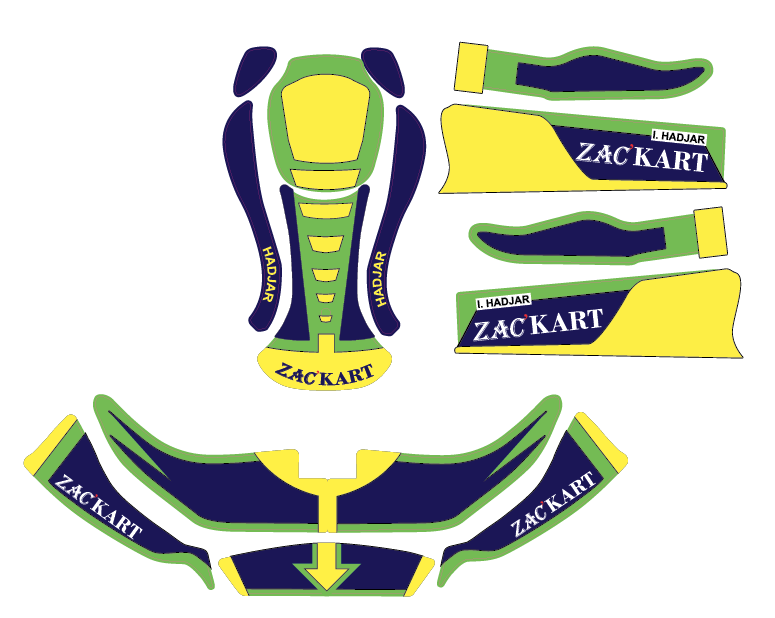 Isack and his Mechanic ARNAUD LAMORET 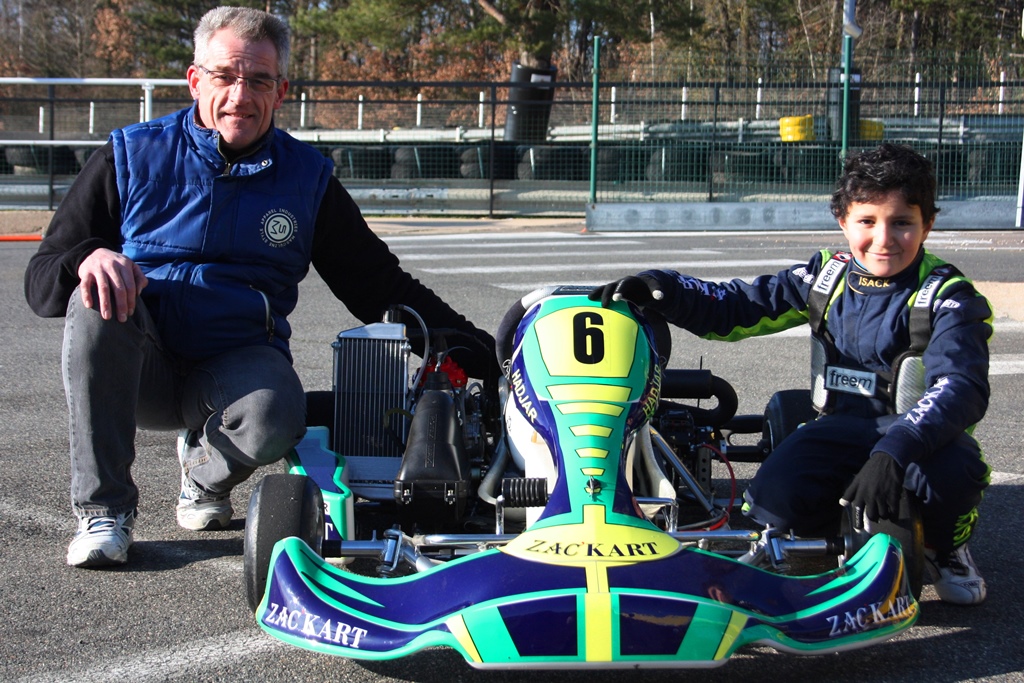 For his first race in Cadet, Isack has already positioned himself in the leading pack. Unfortunately the lack of experience and bad luck did not allow him to materialize.

– Hooking up at the first corner in the Final

Nice racing weekend on a dry but very cold track. Thomas Mialane made a clear round by signing the pole (49.890: best times of the WE) and by winning all the heats as well as the final. Behind, we had a battle between Bertrand William, Théo Nouet and Isack. Before Time Practice, Isack set the second fastest time (50.032) just behind Thomas (50.009) in L4. A bad choice of tire pressure at the EC causes Isack to start in 5th position (with the 3rd Ideal lap time nevertheless). In M1, Isack achieved the best times (50.420) and got back on Théo (who was 3 / 10th slower) to gain second place. Unfortunately, Isack breaks the brake pedal screw while braking in Turn 6 and takes the unfortunate Theo with him in the sandbox. In M2 isack also achieved the best times (50.281) and finished P4. In the Pre-Final we had a very good battle for P3 between Théo (50.379) and Isack (best times in 50.310) where we had 4 changes of position. In the final, bad luck struck again as Maxime Nicolino collided with Isack (at turn 2) who left last. Isack finished, with the downgrading of Maxime, in 5th position.

– The – : Very feverish at the start (to work), bad choice of pressure in EC and lack of control since he cannot align his 3 good sectors (3rd Ideal Lap time), calm the slower pilots who try to gain places by leaving the fast pilots …

Another weekend to forget, but as they say: It is by forging that one becomes a blacksmith …

1- no time in EC because hooking up (rear shaft bent, the second in two races) from the first turns out of the pits with new tires … He therefore started P23 in M1 and M2.

3- Very nice second round where he climbs up 7 places

– The – : Avoid beginner mistakes such as sticking drivers with new and cold tires when leaving the pits. More motivation even if there are no issues …

Without doubt Isack’s best race in the FFSA. Lots of blows and several times stuck by competitors with borderline behavior but never resigned and this even with a chassis with a dry adjustment on the right bearing and rain on the left bearing to compensate for 1.5cm of tube torsion. Well done and above all Chapeau … For the next league race at Le Mans, Isack will have a new chassis.

– The pros : We find the mentality and determination that Isack had in UFOLEP because he is more confident. Isack is no longer intimidated by more experienced pilots. Very good management of departures and especially the management of dangerous pilots (16,18, 8)

After Angerville, it is the second race in the rain with time trials in the dry … Isack achieves a good performance in time trials by climbing to 7th place behind the big arms of the categories Nouet, Pourchaire, Clément, Henrion, Perrin and Martins. In the rain, isack considerably reduced his gap with Victor Martins considered to be the benchmark in the rain (to 9 / 10th in PF).

– The + : Improved mastery of the Kart on a wet track. Always very fast in the dry

– The – : Not enough confidence to seek limits in the rain. In addition, we ask him to stay on the track and that’s what he did … (no more training in the rain)

A race to forget … Even if Isack is well positioned in time trials (P9 out of 31 drivers), the management of the starts and the race is catastrophic. The Pre-Final and the Final end in the first round. The pilot’s mind has a lot to do with it, which is why we decided to focus our efforts on the well-being of the pilot.

Isack goes on an ALPHA chassis Coached by Sébastien Ferro and Father in mechanics: first Pole for Isack and first victory in the FFSA.

Just like Thomas Mialane at the Sens Trophy 1, Isack is performing flawlessly this WE. With his engine problem, Thomas (147pts) could not keep the lead of the provisional classification of the Trophy direction in favor of Isack (152pts) who climbed from 4th to 1st place. William Bertrand always constant, remains in ambush (144pts). Everything will be played at Sens Trophy 3 on September 6 between these 3 drivers.

1st in the provisional classification of the Sens Trophy

Isack goes back to his old ZANARDI chassis and coached by Freddy of the 240 Racing team (mechanical daddy).

Summary of the WE at the 2015 French Championship in Aunay les Bois:
1 homemade engine (from home ???) + an old chassis (with reinforcement tube and therefore non-compliant: what a masquerade and what a shame) + a small pilot with a physical condition far from that of fellows in his category but compensated by a will and an unfailing motivation + exceptional coaching from Freddy Martins + an excellent atmosphere within the 240Racing team perfectly managed by Tony Lavan t + an extremely reasonable cost of the WE (the cheapest weekend of the season) + much appreciated support from SG Rival who always believed in Isack + lots of friends around (Mathys Chez Impekarts , Thibaut Clement , Enzo Costet , Victor Martins , Kilian Fraysse , Enzo Bruno Leveque , Hugo Hugo Karting Lu, Ayrton Huray , Johann Chapon , Thomas Mialane and I forget … WE MIX IT ALL AND THIS GIVES A P7 OUT OF 50 FOR THE FRENCH CHAMPIONSHIP.
For me, as a reasonable father who had asked him to stay in minimal with pilots of his age, I remain stunned by this result. Goal OK! bad tongues will say that there is nothing exceptional and that it is just my son …